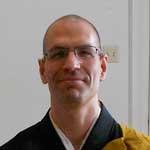 Reverend Eric Daishin McCabe is a priest in the Soto Zen school of Buddhism in Japan. With a keen interest in ecology and the world’s faith traditions, he received his B.A. in Religion and Biology at Bucknell University in 1995. It was in college that he first encountered the art of writing with a “fude” or Japanese brush. Upon graduation, Daishin taught English in Japan for a year and then did a 15-year apprenticeship as a Buddhist priest. During this time, he trained at several Soto Zen Monasteries in Japan as well as in France with the Venerable Thich Nhat Hanh. In 2013, he continued training in the art of spiritual direction and chaplaincy at Wellspan Hoauma Sensitive Yoga for mental health at Broadlawns Hospital. He lectures on world religions at Des Moines Area Community College and teaches Japanese calligraphy. He is recognized as an International Zen Teacher (Kokusaifukyoshi) by the Soto Shu.

At present Daishin teaches at the Pure Land of Iowa and resides with his wife, Reverend Sara Jisho Siebert and their son Malcolm in Ames, Iowa.

The Ancient Art of Shodo