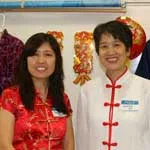 Yongmei Zhou is from Shanxi, China, where she studied Chinese history. She later studied computer information at the University of Detroit. She has been living in the U.S. for more than twenty years. In addition to being a CultureALL Ambassador, she has worked as a book editor and computer programmer.

Born and raised in Shanghai, China, Guifang Xu graduated from Shanghai International Studies University. Before coming to the United States in 1992 with her husband for medical research, Ms. Xu worked as a teacher in Shanghai Foreign Trade Vocational College. Her family had the experience of living in Kyoto, Japan and Chapel Hill, North Carolina. She, her husband, and one of their three daughters have currently settled down in Clive, Iowa. Ms. Xu is a freelance interpreter and translator for various agents and organizations besides her role as an Ambassador for CultureALL. Her hobbies include reading and cooking.