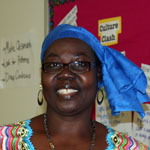 Nida Flombo – a native of Liberia – was forced to leave her village when war broke out. She and her children hid in the hills and eventually made their way to the border where they were sheltered in a refugee camp for several months before making their way to the United States. Nida shares some of these experiences in her workshop for CultureALL.