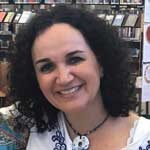 Blanca R. Guerrero Leal was born in Mexico. She lived with her parents and brother for 24 years in a city called Toluca, which is the highest city in Mexico. She studied Business Administration in The Monterrey Institute of Technology (Tec de Monterrey) and also earned an MBA. Years later, she studied a Master’s in Education in TecMilenio in Monterrey.

Blanca, along with her husband Gustavo and their two daughters, Zyanya and Shantal, moved to Iowa in August of 2013. Gustavo was transferred from Bridgestone’s Monterrey Plant to the Des Moines facility. Since then, they have enjoyed the beautiful life in the Midwest.

Blanca works for the Kirkendall Library in Ankeny. She really enjoys helping people. Her real passions are books and teaching, so she facilitates two conversation circle groups; one practices English and the other Spanish at the library. She also loves her family, books, puzzles, knitting, and traveling. She thinks CultureALL is the best way to meet new people and share experiences that allow us to learn from different cultures.