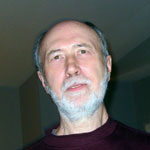 Alexander Yarushkin was born and lived most of his life in the City of Leningrad (now St. Petersburg, Russia), whose inhabitants had suffered dramatically from the Nazi siege in WWII for more than 900 days but had not surrendered to hunger and cold. With its 300-year history, the “northern capital of Russia” has become one of the most beautiful cities in Europe, famous for its architecture, art museums, and intense cultural life, especially during the “white nights” in summer. While in Russia, Alexander worked as the Head of Foreign Languages Dept. for Further Education at St. Petersburg State University. When they retired three years ago, Alexander and his wife (also a university professor) moved to West Des Moines to help their son, who had immigrated to Iowa, with his two young daughters. Missing their professional activities as university teachers, they have compensated by writing books for students in German and Portuguese languages. Alexander enjoys linguistics and cultural studies and is happy to be able to share his knowledge about Russia and the Russian language with students as a CultureALL Ambassador.